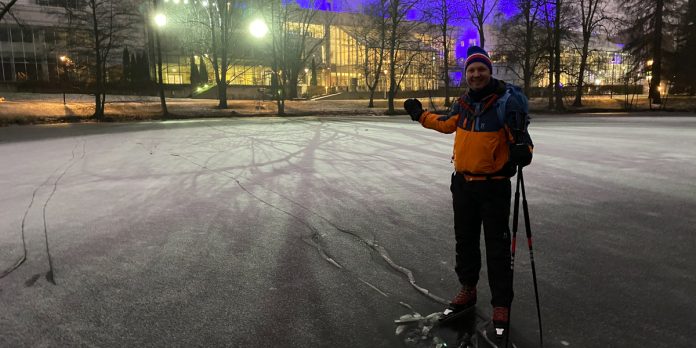 The year 2020 is—luckily—nearing its end. Covid pandemic has been dominating the year, but I have some positive memories of this year, too, even if it is hard to believe. Here I’ve gathered a picture or a video clip from every month of 2020. The theme is, not surprisingly, water and therefore, the main themes of the videos/pics are steamboats and tour skating.

One of the best moments of January was skating in the national park of Helvetinjärvi in Finland. Picking just one video from January is hard as there were other great skating moments, too (like this one from ‘mirror ice’). However, the skating tour in the national park offered wonderful scenes from the air as well as my friend had a drone with him.

A lot of skating videos in February, too. But if I have to choose only one, then it has to be this 83 km skate from Tampere to Kuru on an excellent ice of lake Näsijärvi. These kind of conditions occur on this lake once in a decade. Of course, I would hope that this kind of conditions would be more frequent, but we shall see.

In March, the Covid pandemic reached Finland, too. On the International Women’s Day, a concert was held in Helsinki which later turned out to be one of our very own superspreader events. At the time, everyone was unaware of that and we spent the day skating in the national park of Liesjärvi.

In April, Finland was in the middle of lockdown and there was no more skatable ice on the lake areas. As a result, there was time to participate on the #tussenkunstenquarantaine challenge started by Anneleos Officier. I created my own DIY version of the famous La Mort de Marat by Jacques-Louis David. If you wonder what this has to do with the water theme of this post: it’s the water in the bathtube… If you haven’t yet checked the Finnish versions of this Instagram challenge, you’d better check the Finnish hashtag #karanteenitaidetta.

In May, I had the change to make a ‘test drive’ on the steamboat Warkaus VII. Here you can see loading of the fuel that is going on in a bit more modern way. The pandemic reduced the cruises in such a way that actually this one was the only cruise of the summer of this steamer. Let’s hope that next year will be better!

Even though I promised to only post one video/pic per month, one has to post two of June.

Spending the Midsummer on the steamboat Tarjanne was a wonderful experience after the lockdown of the spring. During this trip it also occurred, that I could do my own share in promoting this world record steamer (112 years on the very same route with the very same steam engine). This video got actually some publicity with the local newspaper so it is probably the most watched of all the clips I’ve ever created.

Just after the Midsummer there was another special trip as we relocated the steamboat Saaristo from Helsinki to Savonlinna. The story is already told on that post but I have to publish one more video of the trip. Having cruised two days already with the small crew, it didn’t take a lot to have a good laugh. At his point, only playing old Finnish evergreens on repeat was enough…

I spent a lot of time on the lakes in July on different steamboats. There was also one nice yacht relocation cruise from Savonlinna to Kaarina sailing through lake Saimaa and Finnish south coast on the Gulf of Finland.

The video is from the cruise of steamboat Antero. We had a Finnish female choir Philomela as our guests and the video is taking on a summer night at the Hillfort of Sulkava.

There were many steamboat cruises in August, too. The picture is from steamboat Mikko, the only traditional wooden cargo steamboat (‘tervahöyry’) left in the world.

The picture of September is from lake Näsijärvi, Tampere during the ‘Aila’ storm in the middle of the month. A cardinal mark has taken some hit in the storm and was drifted to the beach of Kaupinoja.

The traditional gathering of Saimaa steamboats could barely be arranged before the second wave of Covid in Finland. Here’s a picture at Laukansaari, the base of Finnish Steam Yacht Associaton, on a October night.

When is the best time to start learning to paddle? Of course in the end of November… A little bit of snow creates a great atmosphere for a paddling trip. The picture is taken in the route of Haukkajoki, in the Helvetinjärvi National park.

The tour skating (or Nordic skating if you like) season started once again in December. Sometimes it takes quite much effort to find decent and ‘skateable’ ice as can be seen. The contrast to the video of February is striking. But sometimes the reality of a tour skater is like this…

So here were all the 12 visual memories from the past year.

I wish everyone a better and happier year 2021!

Steamboat Tarjanne to use wood as her fuel in 2023