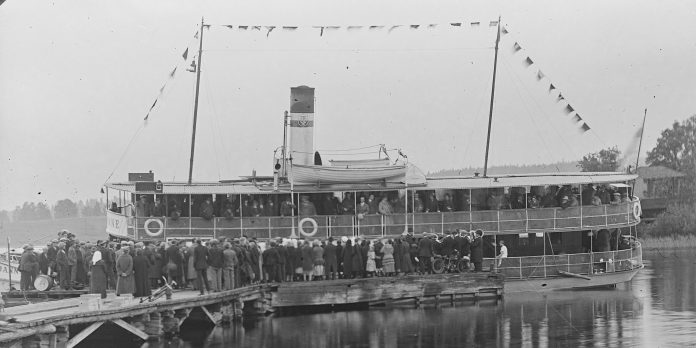 The biggest steamboat news of the year 2022 was published on September 22. The company operating s/s Tarjanne published a Facebook post in which they told that Tarjanne is returning to using wood as her fuel beginning in the summer of 2023. Of course, Tarjanne is not the only steamboat in Finland that has been “returned to wood” from the oil fuelled boilers. For example, steamboats Kouta, Näsijärvi II and Lokki have done the same thing but as Tarjanne cruises on a scheduled route that takes eight hours and has two furnaces, the use of wood as fuel is more demanding a project. The primus motor of this change is the current chief engineer, Markus Puttonen, who has been advocating wood heating for years. Now it is becoming a reality.

A lot of work ahead

What does this kind of change mean then? Firstly, it means a lot of renovation work which is ongoing. The oil burners and tanks are removed from the engine room, the place of the auxiliary engine has to be adjusted and the sole (“floor”) of the engine room has to be lowered to enable the use of wood. After these, new storages for wood have to be constructed on both sides of the boiler to replace the oil tanks, new furnace doors and hatches for wood logistics have to be made. In addition, the furnaces need grates on which the burning of wood is possible. Thus, a lot of work lies ahead even before the steamboat begins its traffic next summer. The next season will be physically more demanding as it has been with the oil fired boiler. No need for external gym though.

If everything goes according to the plans, the 115 years old steamboat Tarjanne will cruise its original Tampere–Ruovesi–Virrat route burning domestic birch under its boiler. My personal estimate is that one trip from Tampere to Virrat will use at least about 9–10 cubic meters of wood depending a little what is calculated in (for example, is the heating up the boiler). Logistics of wood, removal of ashes and sweeping the boiler tubes will bring more work compared to oil fired boiler but the solutions have been thought. The first summer will still be challenging even for professionals.

However, giving up oil as fuel is also looking to the future. At the same time, Tarjanne is also closer to its original form which is very much recommended for a historical steamboat. The soundscape (and the “smellscape”) will be much better with the oilburners gone. Of course, the auxiliary engine is still needed to produce the electricity for the kitchen but perhaps in a few years battery technology and gas appliances for kitchen would also remove this last diesel using engine, too.

Back to the future and past at the same time

Steamboat Tarjanne has come a full circle after this renovation work. When Tarjanne was ordered by the local co-operative in  1907, it was obvious that it would be fuelled by wood due to its easy availability. It was not until the 1920s and 1930s when the increasing road traffic began to take customers away from the steamboats. New ways to get income and to cut costs were much needed. The slowly increasing international and domestic tourism was seen as a possibility to attract new customers. In order to cut costs, the shipping company made some experiments to use coal as fuel for the steamboat in 1937. However, the Second World War stopped these experiments when import of coal was much reduced. The transition back to wood burning was mandatory.

The next major change occurred only in the 1960s when many Finnish steamboats installed oil burners under the boiler. There seemed to be plentiful of this “new” fuel and it was quite cheap. However, the oil crises of 1970s were signs that cheap oil is not a self evident matter. In the new millennium, price of oil began to rise and the climate change brought a new dimension to use of oil. Therefore, returning to the use of renewable wood is both returning back to the roots of Tarjanne but also reacting to the changing demands of the society (and of the world) by giving up the use of fossil fuels.

So, it is time to visit the port of Mustalahti at Tampere and the steamboat Tarjanne next summer as there will much to see and experience. There will be piles of wood on the pier and crew loading wood to the steamboat while a scent of tradition wood fired Finnish sauna will be hanging in the air. Let’s see how this project turns out!

More information of the steamboat Tarjanne can be found in the video below. Click on the cc to turn the subtitles on.

Last of Its Species. Along the Poet’s Way with Steamboat Tarjanne